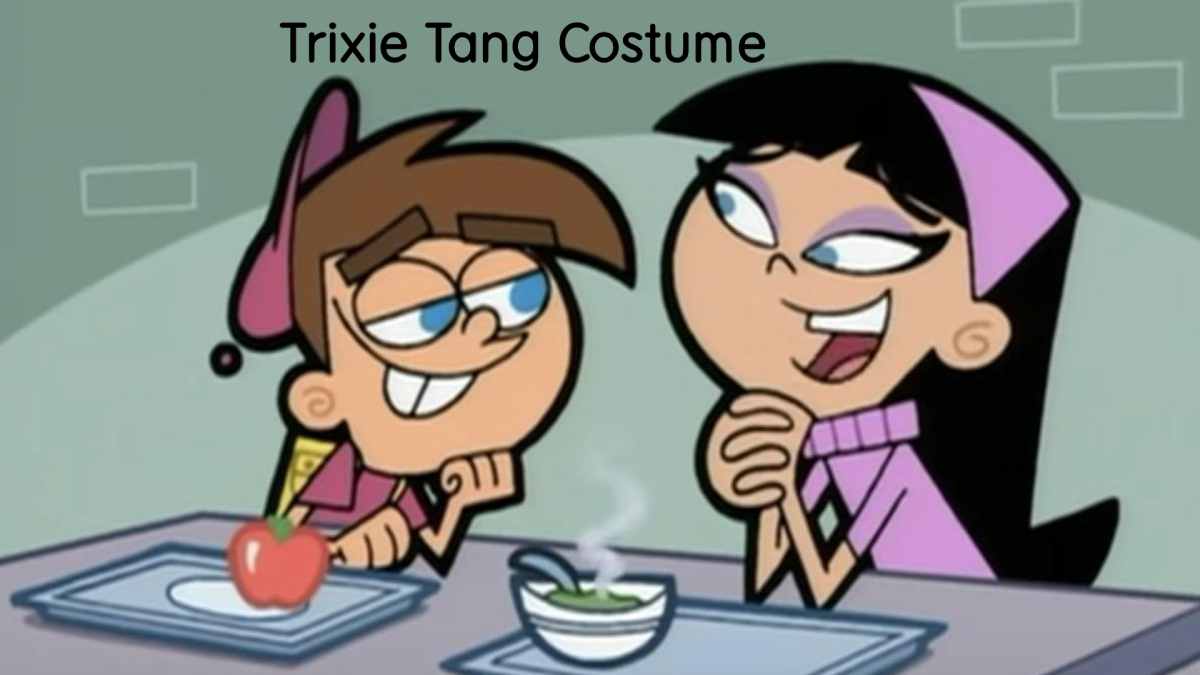 Introduction: Trixie Tang Costume Tell me I am pretty, Trixie Tang is a mirror character in Nickelodeon The Fairly Odd Parents. She is the prettiest, most popular girl at Dimmsdale Elementry School, and Timmy Turner has a giant crush on her. When his fairy godparents turn him into a girl, Timmy learns that Trixie actually enjoys boyish activities such as regarding the comics. When Timmy Wishes to be alone with Trixie, she becomes deranged and obsessed with getting attention.

Like a typical cartoon character, Trixie wears the same outfit every day. It is a simple color palette of pink-purple and white. She has long, straight black hair and wears makeup that matches her outfit even though she is in elementary school.

Items you will need to complete the costume:

How to Dress Like Trixie Tang from The Fairly OddParents 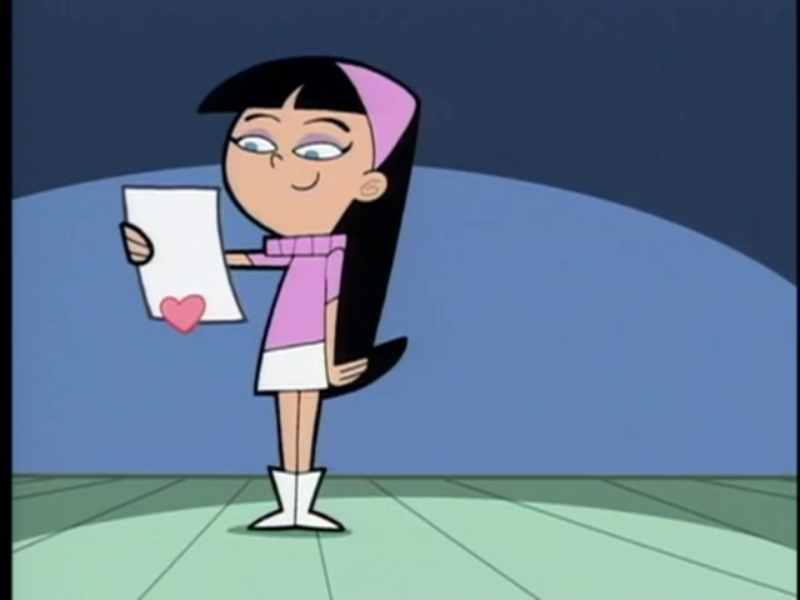 Trixie has long black hair that she wears down. If you don’t have long or black hair, a long black wig would work perfectly. Trixie accentuates her hairstyle with a pinkish-purple headband. This can be done by tying a thrift store scarf around your head. You can also shop for fabric to make your own or check a department store or Claire’s to see if they carry a headband in this color and style.

Trixie has a very specific uniform. Her purple-pink turtleneck sweater could be found at a thrift store. You can cut off the sleeves if it’s long sleeved or if you’re having trouble finding this style, you can use a pinkish purple circle/infinity scarf to give the pinkish purple shirt a cowl/turtleneck feel.

Look for a simple white miniskirt. This can be found at a thrift store or online.

Trixie wears long boots that look a bit like white Go-Go boots. These are sold at costume shops or you can spray paint a pair to suit you.

How to dress like Trixie and Timmy from The Fairly OddParents

Dress up as Trixie and Timmy from The Fairly OddParents;

Timmy’s Outfit – Timmy Turner’s outfit consists of a pink t-shirt, a pink hat, and blue pants. To complete your Timmy Turner Halloween costume, don’t forget the blue sneakers. By the way, according to creator Butch Hartman, the only reason he wore a pink hat was because he ran out of blue ink. 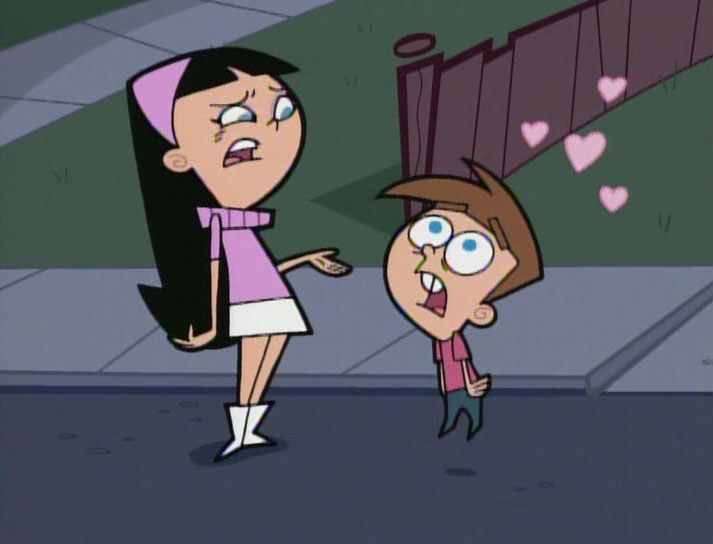 “Timmy and Trixie” is one of two popular love interests on The Fairly OddParents. Timmy Turner and Trixie Tang, who starred in the first season episode, A Wish Too Far. In this episode, it is revealed that she belongs to a group of Popular Kids who look down on Timmy and his friends. Timmy Turner constantly craves Trixie Tang’s affection, but most of the time she doesn’t even give him the time of day.

In some cases, she doesn’t even seem to remember her name correctly, though she can pretend to be, as she revealed in “Hail to the Chief” that she, as the editor of the school newspaper, must know everyone’s names. losers at school. However, when Trixie is often able to talk to Timmy alone, she seems a bit more interested in him and is often softened after meeting him.

At the end of the Channel Chasers movie, Timmy’s two future children were shown. They both have traits of Trixie and Tootie, so it was unclear which girl Timmy ultimately married. The Fairly Odd Movie disputes this, but strongly suggests that Timmy Tootie ends up tiptoeing without mentioning Timmy’s previous romantic interactions with Trixie.

The future of The Fairly Odd Movie, however, deviates from the Channel Chaser canon in that Timmy remains a fairy forever, as shown at the end of A Fairly Odd Summer. The creators have not yet commented directly on this topic. 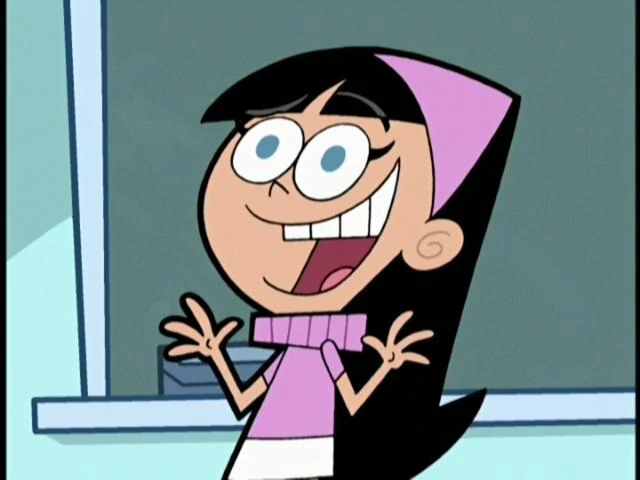 Trixie Tang is an extremely wealthy and popular[1] ten-year-old elementary school student who is the most popular student in Timmy’s school. She is depicted as the typical spoiled rich girl, a vain braggart who likes to flaunt her outward beauty when she needs a quick fix.

Long story short, she is often depicted as mean and inconsiderate, but not with the same kind of pettiness as Vicky the Babysitter. While her attitude towards Timmy’s advances is usually cold, she has grown fond of Timmy before her, usually when her popular friends aren’t around to see her.

Timmy Turner has a crush on her and frequently tries to get her affections mostly to no avail, as she usually rebuffs his advances, which is usually if Timmy doesn’t have something she wants. Timmy has managed to impress her several times, but these moments are relatively short lived.

Trixie is taller than any other boy or girl in her class except for Veronica and Francis. It is unknown if she is older than Timmy, but he mentions that he went to her camp with her, so they are likely the same age. It is possible that she is taller because girls commonly get taller than boys around puberty. She wears a lavender sweater with a lavender headband that holds her hair back and a white miniskirt with matching white boots. Trixie has long black hair and blue eyes, she also wears lavender eyeshadow and black eyeliner. Everyone at Dimmsdale Elementary School considers her the most beautiful girl in school. 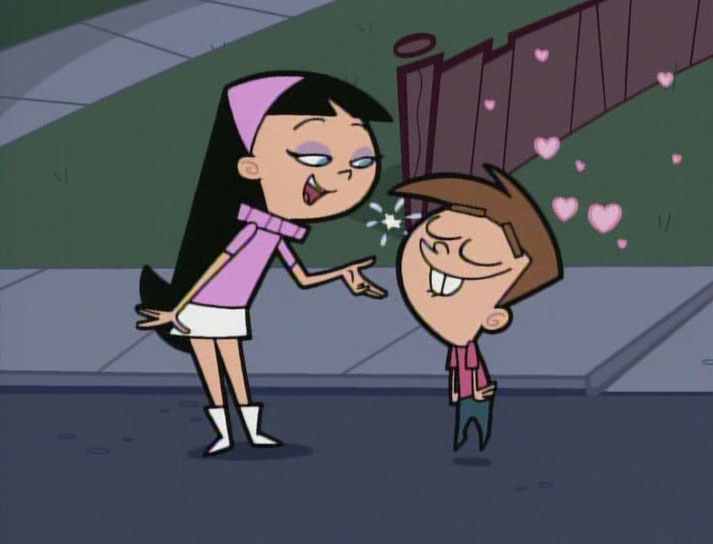 Not much is known about Trixie or her family and how they became so rich during the series. Trixie’s mother has never been seen during the series, she is only mentioned in Trixie’s debut appearance episode. There is a woman on the show who looks like Trixie, but this is Sanjay’s natural mother and she is not to be confused with a relative of the Tang family. Her father is a short, bald man with glasses.

Unlike most rich parents, Mr. Tang doesn’t usually protect his daughter. He was willing to let Timmy, who looked crazed, walk into his daughter’s room with garden tools without arguing. It may be because the popular kids usually have a janitor to look after them. Trixie’s presence in “School’s Out!: The Musical” seems to suggest that she and her parents don’t always get along either, but they were all brief appearances during musical numbers about children and parents.

As revealed in “Wishology!”, Trixie has been attending Dimmsdale Elementary School since kindergarten with Timmy, and he has been trying to get a kiss from her ever since he met her. Aside from Timmy mentioning this briefly, not much else is known about her early relationship or Trixie’s early school life.

Trixie’s friends at school are her best friend and “less popular than her” Veronica, as well as the two popular boys Tad and Chad. She also has dozens of anonymous followers who show up at her birthday and/or Valentine’s Day parties. Although she rarely socializes with anyone outside of her circle, Trixie is still popular because she is the prettiest girl in school, and most of the other students like Timmy desperately compete for her attention to no avail.

It is only shown that several students dislike her, Chester, and sometimes AJ, who don’t like popular kids in general, and Tootie, who is jealous of Timmy’s crush on her (though in “Take and Fake” , Trixie may have invited Tootie to her costume party).

Francis also briefly bullied her along with Timmy. But this was only because he was trying to steal her from Timmy. Which he succeeded in and Trixie went with him to the beach instead of Timmy. Trixie also briefly dated Chester. But he didn’t enjoy it because girls give him hives and she was trying to make Timmy jealous.

Francis also managed to impress Trixie at Dimmsdale Beach when he beat up Timmy and his friends. Threw sand in their faces, and stole Trixie from Timmy. Trixie stayed by Francis’ side until Timmy talked her into it and used the same beach bully strategy on her and Francis.

In “Emotion Conmotion!”, Trixie also went on a brief date with Chester McBadbat. With the goal of getting back at Timmy by dating his best friend. Timmy had lost his emotions and showed no emotion towards Trixie when he became her official boyfriend. Causing her to immediately dump him and start dating Chester.

Later, she and Chester were kidnapped by Dr. Vulcan and were eventually rescued by Timmy and his faeries, although Trixie apparently stayed with Dr. Vulcan when a news report reveals that she is now dating him.

AJ also showed interest in Trixie in “Emotion Conmotion!”, though he normally shows little interest and is the one who usually comments on the futility of Timmy’s efforts to win her over.

The Six Challenges Every Company Should Overcome in 2022

Tips And Tricks To Get The Most Out Of HBO Max

7 Side Hustle Ideas for Gadget Geeks